When I was six, I had a sister.

She liked to call herself Red because she despised pink. She said pink tasted like cat piss. I didn’t know how cat piss tasted, so I believed her.

Red told me to collect every piece of pink clothing from my wardrobe and throw it out the window. From our Soviet-grey ninth-floor flat, I watched them fly: the arms of my jumpers, gripping for air, the T-shirts, fattening like parachutes, the tights, god, the mad-mosquito-tights always biting my thighs until I got hives. In the air, they squirmed like eels.

When Dad got home from work, he held up a black plastic bag. “You could’ve just told me you didn’t like these anymore.”

I avoided the deep-dark sheen of his eyes matching the bag and studied my mis-matched socks. I could’ve just told him, yes, but that would’ve required knowing what I liked in the first place.

Red knew what she liked. The two of her most favourite things were:

Every night, Red would tell me stories about how lions ran a comb over their manes when the lionesses looked away. Or how puddles were wormholes snaking into the spirit world smelling of Sunday pancakes made for three. Or how the great white shark could spend all his salary at the dentist and end up being poor.

The word I often heard whirring in the walls of the building’s corridor. Poor child. Poor man.

The words gasped and swarmed Dad, stinging him like wasps.

That night, Dad came to my room and sat on my bed. The mattress moved under me like tamed waves. Dad’s tall-thin shadow leaked out the door. He looked at me with a feather-smile and kissed my forehead. His stick-fingers combed my mane – as Mum used to call it –, until I fell asleep.

That night, I dreamed of a Dumbo-eared, cinnamon-freckled, wolf-wild girl, running around in the rain holding a red umbrella. Her dark rubber-boots rushed for every single puddle they could find, splashing and sloshing into one pool after the other, where the great white shark was on tour, begging for change.

I'm not a talker. I'm a writer. View all posts by Noemi 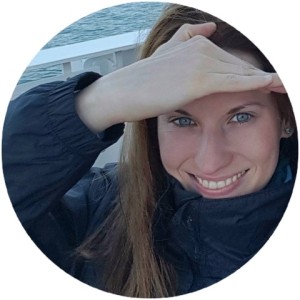 From a small ex-Soviet flat in Hungary, now a nomad in a small world. A fan of cats and underdogs. she/they/we 💚